The Leaky Gut and Allergy Catch-22, The Underlying Trigger for a Myriad of Health Concerns

The complete transcript of the Webinar The Leaky Gut and Allergy Catch-22, The Underlying Trigger for a Myriad of Health Concerns, from April 26, 2018, is available below.

Welcome to US BioTek Laboratories webinar on The Leaky Gut and Allergy Catch-22, The Underlying Trigger for a Myriad of Health Concerns. The presentation will be recorded today and will last a total of about 45 minutes, with a brief question and answer session at the end to round out the hour. At any time, please type your questions for the Q&A session in the chat box located at the bottom right of your screen. If you do not see the chat box there, you may first need to select the chat feature in the upper right area of your screen.

Please note that due to large attendance, all attendees microphones will be muted upon entry. Please, do not unmute your microphone during the presentation. To let you know, in case you're wondering about the chat box, I just posted a chat, so if you did not see it, then you will need to select the chat box up at the top right, it's an icon. I posted information about checking your audio settings.

I'd like to tell you a bit about Dr. Meletis, our presenter. Dr. Chris Meletis is an educator, international author and lecturer. His personal mission is changing America's health, one person at a time. He believes that when people become educated about their body, that is the moment when change begins. He has authored 16 books and over 200 national scientific articles in such journals and magazines as Natural Health, Alternative and Complementary Therapies, Townsend Letter for Doctors and Patients, Life Extension and Natural Pharmacy.

Dr. Meletis served as Dean of Naturopathic Medicine and Chief Medical Officer for seven years at NCNM, now NUNM and was awarded the 2003, Physician of the Year by the American Association of Naturopathic Physicians. He has a deep passion for helping the underprivileged and spearheaded the creation of 16 free natural medicine healthcare clinics in the Portland metropolitan area of Oregon. 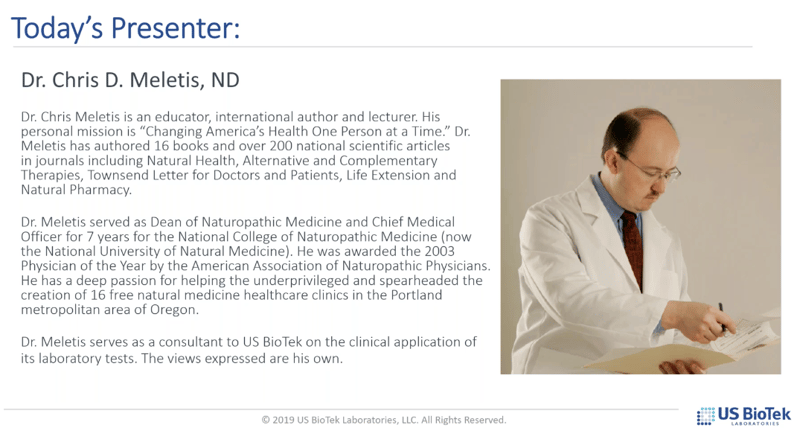 So Dr. Meletis, the first question that I have for you is, which tests for the food specific antibody tests. With the illustration of the IgG and IgA sample report being shown, do you prefer to order IgG and IgA together or what is your standard choice for US BioTek food specific antibody tests?
So it all comes down to, of course, the patient budget, but I invariably may do more IgG, IgA combo because I want to know what's going on in the mucus membranes. I want to know how directly irritating are these foods and are they working on that pathway and I give the example for my patients. If we do a celiac panel to see whether or not a person has celiac disease, what do we do to ensure that that test is accurate? We do a baseline CIRM IGA.
And so what I like to do is I always like to look at how our mucus membranes, that interface doing with the outside world. And if they have gut issues, allergy, hay fever, mucus membrane, sinus issues, IgA always. Now, many of us have noticed that there's a lot of crossover between IgG and IgA and even looking at this graphic you can see, well they are pretty common, but every once in a while I will get an outlier of a couple of just pure white lines with no gray associated with them. And missing something, which otherwise are eating a lot of and that is an IgA related and wouldn't otherwise have shown up, is important.
And I'll give an example here of the cheddar cheese. If everybody can see the screen, the cheddar cheese, actually that IgA is even higher than the IgG. And if I had a choice between mozzarella cheese for this person or cheddar cheese and they're going to have pizza no matter what. I'm going to go for the mozzarella cheese.
Great, thank you. The next question is regarding a specific patient with laboratory findings. A patient with CLL and concurrent elevated IgG. Do you think that this could be related to the gut and food sensitivity or just as a marker of CLL?
So I'm assuming we're talking about chronic lymphocytic leukemia.
That's what I'm assuming as well.
Okay. So I would say that any ... So clearly the body's talking to us and as functional medicine providers, since there is already, this hypervigilant within the body, anything that's further perturbing this needs to be minimized because it's all about immunological control. And if we're triggering immunoglobulins in the humoral immunity, we need to try to quiet down thing. So I would approach as much like I would an auto immune patient. Let's quiet down things while addressing the underlying cause, what were the triggers? For these patients which I actually have treated CLL patients, I would actually go ahead and do the environmental pollutant panel.
Actually one of the gentlemen that have this condition, used to work in a truck, I don't know, warehouse manufacturing and repair and he was high in Ben jeans and [inaudible 00:50:40], which were poison in his bone marrow and had this some toxic mill. And so I would probably avoid the ... I do the foods, but I also do an environmental pluton panel on that patient. My experience in some sort of detox.

The cross reaction between gluten and dairy

That was a fantastic question and a wonderful answer. And we're especially fortunate that you have that clinical experience. Then next question, Dr. Meletis is about the cross-reactivity that you mentioned of gluten and dairy because they're not closely related by food families. What is the mechanism of that cross reaction?
It's actually an epitope. So because I'm old ... I don't like to say I'm old, but I'm old enough to have grown in houses which had still a little keys which allowed you to pass from room to room. But if you think of the key and lock mechanism, which has really fallen out of favor immunologically to a larger group because there's so many more mechanisms, but they're close enough in terms of receptor activity that they actually will cross react and actually trigger in neurological reactivity. It's actually on my cross-reactivity lecture. Actually, I have a couple slides dedicated to visuals and graphics on this epitope cross-reactivity.
So basically, it's close enough like I'll give it a silly example that just comes to my mind. I have a catcher's mitt and it's for softball, but it's good enough to catch our baseball. I have a baseball mitt, but it's capable to catch a softball, different games, same rules, but the cross reactivity is because of the epitopes.
Great explanation. Thank you so much. I am not receiving any more questions, which I suspect is because you've shared with us a very thorough educational presentation, Dr Meletis. Is there anything else that you would like to add?
I'm just in my clinical practice, I'm a test, don't guess I'm actually off to the naturopathic university, which I graduated under NCNM, but now it's in NUNM because we have so many other degree programs, much like that steer and other naturopathic college has grown over the years. And I'm going to be just lecturing on how this is one of the ways which now is going to empower patients. So this could be a 90-minute lecture, I give this weekend on how testing is a great way to support your practice, to get patients back. And I've found over the years, when my patients see it, they're going to believe it. I can tell them, I think this is a problem, that's a problem and I'll give one short little story.

The US BioTek food sensitivity test

When I was a young guy, 26 years old, just graduated, so I'd gone from high school to undergraduate at Reed college and on my bachelor's degree in biology and pre-med and then went to two years of conventional allopathic medicine and went into naturopathic medicine. I went boom, boom, boom. So at 26, I graduated and I have a 77 year old gentleman and he comes in. He has been years, his name was Harley. And I said, "Harley, I think you have a dairy issue and I think you have a wheat issue." He says, "Son, I grew up on a dairy farm and a wheat farm. I don't have either of those. That never bothered me." I said, "Will you humor me and just do the National BioTek," which is now US BioTek food sensitivity test."
He said, "I will, but you're going to be wrong." I said, "I'll find out. I'll eat my fruit and I'll have all this crow," and lo and behold, he actually ends up being both wheat and dairy sensitive and he was 77 years old and was downhill skiing and he wanted to start downhill skiing again. And down here in Portland we had a little deli called roses and he's actually, the room was just start spinning and lo and behold he started downhill skiing again. It's been years got better and begrudgingly he said, "Son, you're right, dairy and wheat were a big issue." Thanks for allowing me to speak.
Again, with the humor, thank you. Well, Dr. Meletis, since we have no more questions, I would like to offer a big thank you to you for sharing your knowledge and expertise with us. And also I am going to see if we can pop up to the last slide so that it displays our contact information. Dr. Meletis has generously shared his email with all of us for any questions about the information that he's presented today.
Thank you everyone again for joining us today. I hope you enjoy the rest of your day and this concludes our webinar.
Thank you. Thank you everyone.
Thank you too, Dr. Meletis.